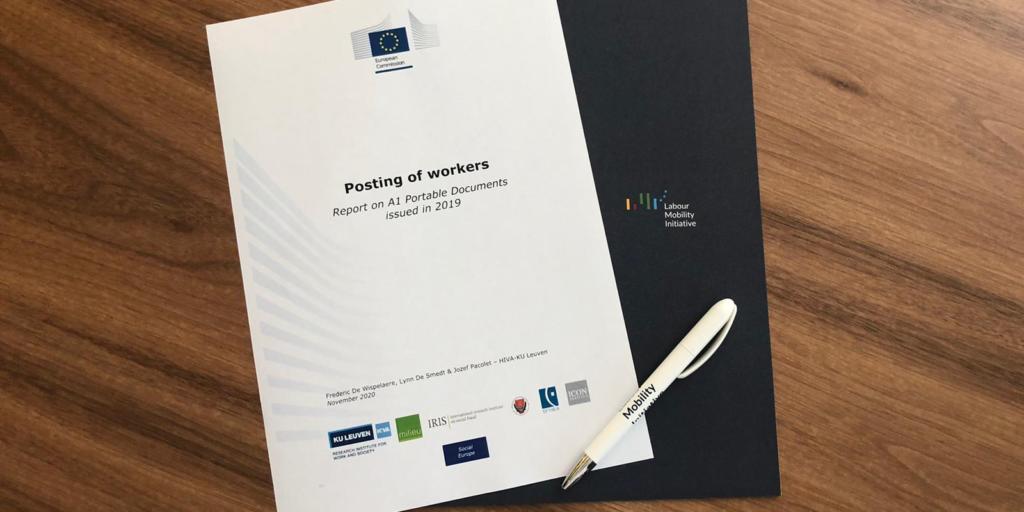 The annual report on Portable Documents A1 (PDs A1) issued in 2019, drawn up by Frederic De Wispelaere, Prof. Jozef Pacolet and Lynn De Smedt from HIVA-KU Leuven is hot-off-the-press. This year, apart from the usual, authoritative data, it also brings some fairly unexpected results.

Commissioned by the European Commission, the report analyzes the changes in Portable Documents A1 (issued on the basis of social security coordination Regulations 883/2004 and 987/2009 – and particularly pursuant to the former’) from both sending and receiving perspective, with a special focus on the posting of workers. It also takes stock of the ongoing revision of the social security coordination Regulations as well as the adoption of the Directive 2018/957 (‘revision Directive’). The latter has been aplicable since 30 July 2020, which due to the yearly scope of the report, was beyond the Authors’ investigation.

(Unexpected?) change of a leader

By far the most PDs A1 were issued pursuant to Article 12 (3,177,941 PDs A1 issued in EU-28), while Article 13 was the basis for 1,314,085 PDs A1 (while approximately 80 thousand PDs A1 were issued on other legal bases). Indeed, Article 12 is the basis for the majority of PDs A1 issued in 17 Member States. This is the case especially in Germany and France. On the other hand, Poland issued almost 60 % of its PDs A1 under Article 13, whereas 38% were granted on the basis of Article 12 Regulation 883/2004. Other Member States with a particularly high percentage of Article 13 PDs A1 in 2019 included Cyprus, Liechtenstein, the Czech Republic and Latvia.

As the Authors rightly note, whereas in recent years a strong growth in the number of PDs A1 issued had mainly been due to the application of Article 13 Regulation 883/2004, the increase of Portable Documents issued in 2019 is primarily the result of the application of Article 12. Indeed, the number of PDs A1 issued pursuant to Article 12 and pursuant to Article 13 in 2019 showed a growth rate of 77% and 24% respectively. It was ainly due to a strong increase in Germany, where a number of such documents quadrupled as compared to 2018. For the Authors, the underlying explanation of such dramatic upturn it to be found in the increased awareness of German employers about the application procedures for a PD A1, which resulted in their increased applications. It concerned especially short business trips, for which the overwhelming majority had most probably not applied for PDs A1 before. Besides, it goes without saying that the ‘increased awareness’ was ‘helped’ by some Member States’ tightening their national rules aimed allegedly at combating the so-called ‘social dumping’ and undeclared work. As noted in a document published by the German BMAS in June 20191, this was the case especially in France and Austria.

Had Germany been a ‘silent’ leader in PDs A1 issued in previous years, too?

Naturally, such a sudden and dramatic rise in PDs A1 issued year over year has raised several eyebrows. It also provokes a follow-up question – had Germany always been a leader, but ‘a silent’ one (with some of applications for PDs A1 that had not actually been filed)? This issue is yet to be studied in further detail, for now we would like to raise several points. Firstly, a sudden ‘discovery’ of ‘additional’ PDs A1 does not necessarily need to be limited to Germany only. Thus, the real figures could significantly differ also in case of other main sending Member States, especially Poland (at the same time, due to Poland’s lead in Article 13 PDs A1, this might not take away the overall lead from Germany). Secondly, the above-mentioned clampdown of some of the receiving Member States on posting of workers should not be underestimated. We believe it contributed significantly to the rise of PDs A1 applications filed by German entrepreneurs. Thirdly, the recent case law of the Court of Justice of the EU (most notably, the judgment in the Bouygues travaux publics case C-17/19) could have also contributed to the raised awareness. The Court has emphasised the division between posting of workers and the area of social security coordination, where the PDs A1 belong.

What next for PDs A1?

Important policy measures within the area of the posting of workers and social security coordination regulations have been undertaken over the last few years. They were based, at least to some extent, on the reported figures of PDs A1. A question may arise: did the picture of the size and impact of posting of workers mirror real dimensions of that phenomenon throughout the years? Naturally, the matter is yet to be analysed in further detail, but we believe that we should answer this question in the affirmative. We are of the opinion that the respective reports appropriately reflected the reality of posting in respective Member States and its actual proportions, even if the figures, due to intricacies of approaches to applying for PDs A1 in individual Member States (as evidenced by the case of Germany) could have varied even year over year. We conclude that the Union legislator could have reasonably relied on the reports in question.

Moreover, the report for 2019 may not be the only one bringing unexpected results. We believe that we are in for another surprises in a report, documenting Portable Documents issued in 2020 and not only because of the Covid-19 pandemic. For now, the current report makes for a very instructive reading.