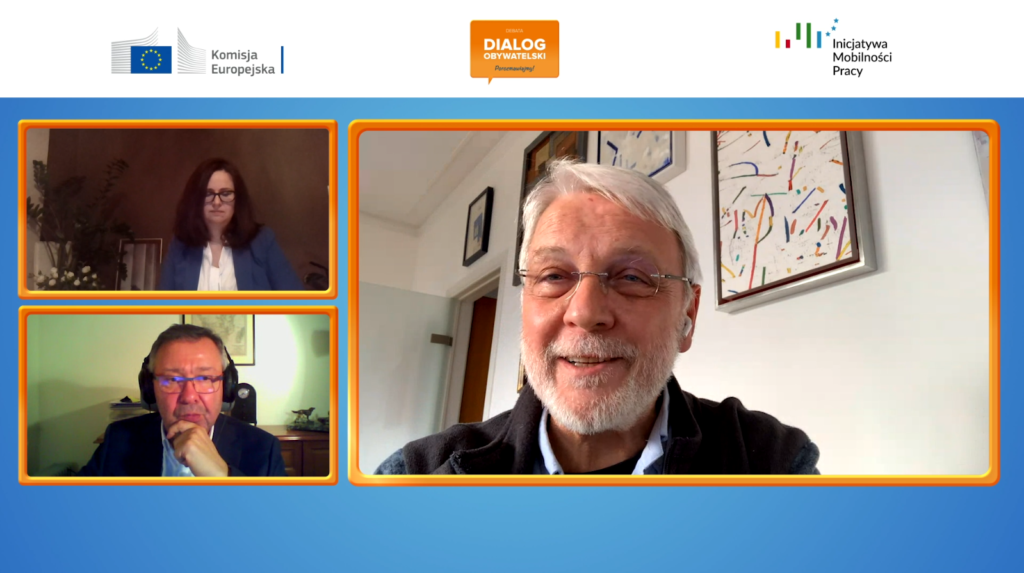 The speakers of the Citizens’ Dialogue were Jordi Curell Gotor, who is the Director of labour mobility at the Directorate-General for Employment, Social Affairs and Inclusion of the European Commission and Magdalena Sweklej, a counsellor at the Labour Market Department at the Ministry of Economic Development, Labour and Technology. The organizer of the Citizens’ Dialogue was the European Commission, and the executive organizer – the Labour Mobility Initiative Association. The Citzens’ Dialogue was led by the journalist Maciej Zakrocki.

Labour mobility in the EU

The leitmotif of the discussion undertaken by the guests during the Dialogue was the labour mobility in the European Union. During the Dialogue, the speakers spoke about, inter alia, the revision Directive on posting of workers 2018/957/EU, European Labour Authority, the need to amend the EU provisions on coordination of social security systems and the impact of the pandemic on posting of workers.

In his speech the director Jordi Curell Gotor expressed his position on the revised directive on posted workers and its potential impact on solving problems arising in the context of the freedom of providing services. The speaker, referring to the issue of the validity of the amended provisions of the directive, emphasized clearly that the current balance is appropriate and that the decision to amend the provisions made by the legislator was highly aware.

In response to the doubts presented by Magdalena Sweklej as to the consensus in society regarding the legitimacy of the new regulations, Jordi Curell Gotor pointed out that there is a common belief that the issue of the revised directive is a complicated matter. However, the director emphasized the important role of the European Labour Authority (ELA) in solving potential problems arising from the amended regulations.

Director Jordi Curell Gotor also referred in a few sentences to the need to amend the social security coordination rules, confirming at the same time that there is still no agreement between the legislators on this matter.

Impact of the pandemic on the posting of workers

Next, an important issue that Magdalena Sweklej referred to in her statements was the impact of the pandemic on posted workers. The speaker emphasized that the pandemic clearly showed that posted workers and employers are facing new challenges. However, as she underlined, we do not yet have any data available on how the COVID-19 outbreak has and will affect posting of workers in the internal market. Referring to the A1 Portable Documents for posted workers and the number of posted workers from Poland pursuant to article 12 of Regulation No 883/2004, Magdalena Sweklej indicated that one might get the impression that we are dealing with a certain reduction in the number of posting of workers.

Moreover, Jordi Curell Gotor, who was the director of the ELA, was asked about the serious challenges and abuses in the area of labour mobility of which the European Commission is aware.

In response, the speaker discussed the issue of a negative and one of the main phenomena – letterbox companies. Jordi Curell Gotor emphasized, returning to the topic of ELA, that it will achieve full operational efficiency in 2021 and is already functioning to a limited extent. Director pointed out that related inspections have already been launched and that the ELA is therefore operational, despite the pandemic. The new director will take office in December or January at the latest. However, the ELA will achieve full autonomy no later than in August next year.

Summing up his speech, Jordi Curell Gotor referred to the future of mobility in Europe. The speaker emphasized that without mobility, Europe would not work, and if Europe did not work, the Member States would not work either. The speaker also mentioned the problem of closing borders to all Member States. Both for those who send their workers abroad and for those who are perceived as receiving foreign workers. In conclusion, the speaker pointed out that, fortunately, mobility will survive, and we must create an increasingly better internal market.
This is just a big summary of what was discussed during the Citizens’ Dialogue “Labour Mobility in the European Union”. Therefore, we encourage you to listen to the entire recording. It is available on our YouTube channel.