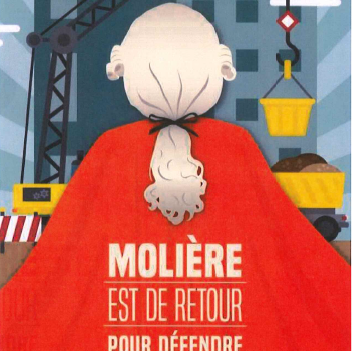 In the recent months in France a disturbing trend has revived. It is known as the “Moliere clause”.

Under this catchy name, there is a requirement that the workers in public transport and public construction work, who come to work temporarily in France, were fluently speaking French (or had constant access to professional translators’ services). The official reason for such an obligation is the desire to comply with occupational safety requirements. Unofficial – it is supposed to make the French jobs only reserved for the French.

Imposing use of the French language… in English

However, it looks like a fresh idea, it was ‘invented’ over a decade ago. The author was a French politician, Vincent You, the deputy mayor of Angouleme from the Nouvelle-Aquitaine region. In the recent years it was adopted by local authorities of some towns and smaller units such as Normandie, Auvergne-Rhone-Alpes or Hauts-de-France. Now the capital region of Ile-de-France has joined (noteworthy, there the regulations imposing the use of French language have been included in the English-titled “Small Business Act”).

“Openly xenophobic clause” will be problematic for… French posted workers

Authorities in the regions mentioned pointed out that the requirement constitutes a tool to fight the so-called ‘social dumping’.

The idea of introducing the clause was criticized by the socialist French prime minister Bernard Cazeneuve by calling it the ‘Tartuffe” clause, while presidential elections candidate, Benoît Hamon has named it “an openly xenophobic clause”. Co-rapporteur of the Posting of workers Directive revision proposal – French MEP Elisabeth Morin-Chartier has also joined the critics. On her Twitter profile she has shared a letter to her fraction’s (EPP) presidential candidate, Francois Fillon where she wrote that adoption of such provisions means surrendering to the populist dictatorship and loss of the achievements of the “founding fathers” of the European Union.

Moreover, she raised that the clause may cause trouble for the French posted workers, who might become subject to similar requirements in the host countries. It is an important reason. According to the research from recent years, including the Report on A1PD’s issued in 2015, France is the third country in terms of the number of workers posted in the EU.

Clause against the EU law

In the Morin-Chartier’s letter mentioned, there was no clear distinction that the clause is against the EU law. In particular, by infringing the prohibition of discrimination on grounds of nationality and the rights derriving from EU citizenship. European Commissioner for Employment, social affairs, skills and labour mobility, Marianne Thyssen made such a statement. In an interview with the French newspaper Le Parisien, she assessed that the clause is discriminating and against the EU law.

Labour Mobility Initiative is Europe’s largest think tank dealing with work mobility and posting of workers. Since 2013 it has been bringing together scholars, enterpreneurs, trade unions and public administration to create the only Polish and the largest European substantive forum for exchanging knowledge on the posting of workers in the framework of freedom to provide services.

Trilogues on Social Security Coordination’s revision are underway. What shall we expect?